Can You Change an Old Dog’s Name?

You may have just found your next heart dog. A fabulous golden oldie you can’t wait to bring home from the shelter or rescue group. The only problem is, you can’t stand the name! Is that a dealbreaker?

Don’t worry, of course you can change an old dog’s name. Want to hear even better news? It won’t take long for him to get used to it!

At what age can you change a dog’s name?

No matter what age your dog, and of course in this case we’re talking about an old dog, a name can always be changed. Apologies if I’m stating the obvious but…please only change it once or you’ll confuse the poor guy or girl!

Tips for choosing a new name for an old dog

Some people are great at choosing names for pets, sadly I’m not one of them. If you’re like me these tips may help.

♦ Choose a name you really like. You’re going to be using it for a long time, you should like the way it sounds

♦ A similar sounding name, or one that rhymes with his current name could help him learn his new name more quickly

♦ Don’t choose a name that sounds similar to a command you will likely use often. For example – Bo and no

♦ Don’t pick an offensive or stupid name. Think about whether you’d be embarrassed calling it out in the park, or hearing the vet staff announce it in front of a packed waiting room. Many years ago my vet told me a woman in the park she goes to named her dog “email.” She said the woman sounded absolutely ridiculous standing in the park yelling “email” all over the place. Then again you could argue, who cares what other people think as long as you like it!

♦ Keep it short. You can always add to it later if you want to make it fancy

♦ Don’t make it sound too much like names of other pets or children in the home. It can be confusing and make it harder to learn

♦ Practice saying it and see what you think – are you comfortable? does it roll off the tongue?

♦ Be sure everyone living in your home is in agreement. You don’t want those who aren’t to pick a different name and confuse the poor dog

♦ You may love the popular names of the moment, but think about whether it matters to you if 3 or 4 other dogs at the park have the same name

♦ Do you have a favourite character in a book or movie? A hobby? Perhaps use those as inspiration 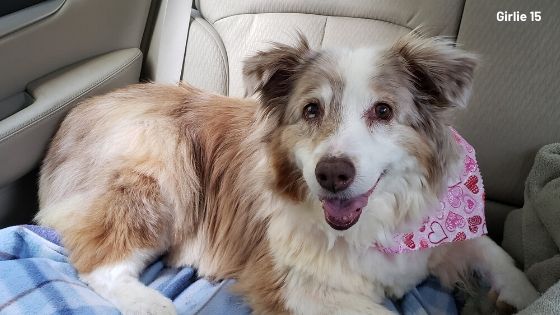 How to teach your old dog his new name

Don’t use his old name when you’re feeling frustrated when he doesn’t respond to his new moniker right away.

A food motivated dog is easier to train, so break out the high value treats. You know…the ones he absolutely loves but are saved for special occasions!

Training is always best done in a quiet area with no distractions, and this is no different.

When he’s looking at you say his name in a cheerful voice, give him a treat and some praise. Yes, it’s that simple! I should say the process is simple but you need consistency. Keep training sessions short, otherwise you’ll lose his interest. Repeat this several times a day, no longer than about 5 minutes each session.

Once he reacts to his name when he’s looking at you, try it when he’s not. He can be in the same room but his head is turned, or he’s quietly playing with a toy. Call his name and when he turns to you do the treat and praise thing again.

Once he’s consistently responding when you call his name, slowly cut down on the treats. Instead of giving him one every time, do it every second then third until he’s responding without rewards.

Have everyone in your household do the same, and it won’t be long before he knows his new name.

My experience changing, and not changing, my old dogs’ names

I foster and adopt old dogs, and they all come to me with names given to them by shelter staff. Many I’ve kept because I was fine with them, others I’ve changed. One example I will share is of my heart dog Red. To be honest I wasn’t very fond of the name, but I was used to it. I had been volunteering in the “oldies room” of a local shelter and met her there.

Due to circumstances beyond my control, I wasn’t able to adopt her right away so had to settle for seeing her every week on my volunteer day. I guess I just got so used to the name I kept it but…I did have some nicknames I started calling her.

In this case I simply added another name to her existing one, and after hearing it enough times she responded to all of them.

Here are the names I called her –

♥Rosiemondo (okay that one is a bit odd!)

She heard them so many times it didn’t take long for her to respond to any of the above!!

Is it fair to change a dog’s name?

Plenty of dogs find their way into shelters and rescue groups with no information known about them, and that includes their name. In those cases, they will be given a name which is already different from the one they had before. In that case it’s not a question of fair or not, the poor pup needs to be addressed somehow.

I’ve read that in cases of abuse, or even suspected abuse where the name is known, changing it may be the best thing you can do. The dog could associate his old name with all the trauma and neglect he may have suffered. Giving him a new one may help him recover as he starts his life in a new and loving home.

How to change a dog’s name on a microchip

When you adopted your old dog, you were likely given paperwork that proves your dog has been microchipped. That information will include contact details for the company. Many rescues will change the paperwork to reflect you as the new owner, and can make the name change as well.

If you haven’t decided on a new name at that point, contact the microchip company and they will assist you in updating the information on your account.

What are the most popular dog names?

Nationwide’s pet health insurance branch has come up with a list of the most popular puppy names, by state.

The top 5 most common names in the U.S are –

Although this data was collected based on puppies (under 2 years of age), there is no reason old dogs can’t use these names as well. As a matter of fact, I adopted an old Maltese a few years ago named Bailey.

If you’re curious about the most popular name in your state, you can find the list in this article called “Most Popular Puppy Names by State.”

Are Eggs Good for a Diabetic Dog?
Next Post:Can You Re-Use Dog Diapers?