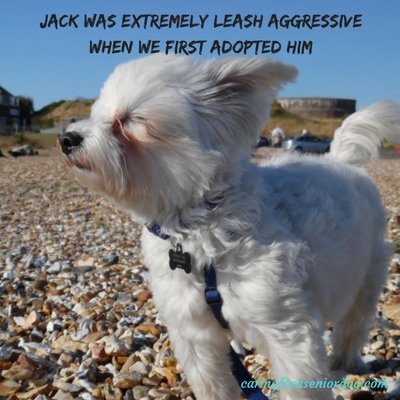 You may be wondering why a topic such as this, is appearing on a senior dog site? Well, if people could get over the attitude of senior dogs being close to death, they’d realise dogs of any age can be in need of training.

Has your dog always been great on a leash, but as he’s getting older he’s becoming aggressive?

Have you recently adopted a senior dog, with a past that is unknown?

Perhaps, like us, you adopted a dog who was mistreated and is now insecure and/or fearful.

When dealing with changes in behaviour or a new member joining your family, my usual recommendation applies. Get down to your wonderfully helpful vet for a health check to make sure everything is fine.

The results are in…

I can’t possibly know what your vet found or didn’t find, but many of the suggestions listed below can still be applicable. 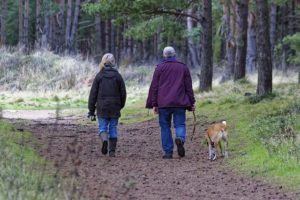 If it turns out they aren’t…

…perhaps the best solution in your case is to do what my neighbour does. He has a lovely old dog named Sasha. She has vision and hearing loss, and I wouldn’t be surprised if she suffered from some degree of dementia as well. Because of all that, the poor baby freaks out when anyone is around. What’s the point in constantly subjecting her to busy streets, and lots of “targets.” He now just walks her around the immediate area, away from foot traffic, and she’s doing great. It’s the kind thing to do for her, she remains calm, and still gets her outings.

Back to the article!!

For those who’ve had their dogs from the beginning and whose past is no secret, or your incredibly helpful training has given him a new lease on life, reasons can include:

the walker giving unintentional signals to be aggressive

bad experiences with other dogs caused fear or dislike

loves to play so much he gets frustrated being held back

When this behaviour starts, the walker will instinctively tighten up on the leash, to hold the dog back. This creates 2 problems – 1) the walker becomes on edge each time they’re out, transferring that tension to the dog and teaching him there is something to fear and 2) tightening up on the leash is exactly what you do in attack training – meaning they’re unintentionally training the dog to attack.

Off leash dogs in a dog park tend to approach each other in an arc, not head on. They sniff, then decide whether to hang out, or move on. That’s in real contrast to dogs out for a walk on a leash, who approach each other head on, looking at each other, not being able to turn their bodies, all of which in doggie language is threatening, and looking for a fight.

This is intensified when the walkers stop to chat, keeping the dogs in this state longer and longer. As the dogs strain against their leashes, guardians are tightening them, holding the dogs back, adding to the problem by confirming for the dogs there is a reason to feel threatened.

Dogs sense the change in our behaviour and body language, feeling the tension all the way through the leash. Now not only are you on edge, but so is the dog, creating a vicious cycle that will never end.

A quick note – don’t blame your dog if irresponsible owners allow their off leash dogs (or even on leash) to get in your dog’s face, jump on them… It’s considered rude doggie behaviour, and your dog is responding appropriately.

Here is a starting point

Never, ever punish your dog for barking.

He needs to pay attention to you, so practice in a quiet environment at home. Call his name in a calm voice, and when he looks at you, reward him. Try it in increasingly busy areas, as that’s the challenge. 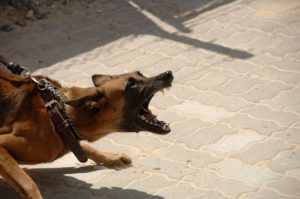 Pay attention to your dog’s body language, noticing what changes occur when he starts to get aggressive. If you intervene at the hint of a first sign, you’ll have better luck preventing full out aggression, and getting him to respond to your commands.

If your dog goes full out aggressive, he won’t listen to you so forget it, just remove him from the situation as quickly as possible.

Your own state is equally important. Don’t hold your breath or have rigid posture – be casual, be cool.

Always keep the leash loose, no tension, but be sure to have a firm enough grip, in case you have to pull him back quickly.

Tire him out a little before your walk, by playing with him for a few minutes. A tired dog may be less reactive.

If you have a small dog that can easily be picked up, cover his face so he doesn’t see approaching dogs. Don’t do this as a matter of course, just if you don’t feel in control of the situation.

Cross the road, or turn around.

If a dog is approaching head on, try and make a large arc around him, keeping calm and not saying a word. Of course reward your dog (only if he was “good”) until they’re out of sight of each other.

Stick to the quieter areas, where encountering others is less likely.

Change your dog walking times to when you know there’s fewer chances of meeting other dogs and/or people.

Is this really the solution?

Of course the avoidance techniques are just band aids, and won’t help him get over the aggression. You’re also denying a social creature the opportunity to interact with people and others of his kind, which really isn’t fair.

Having said that, if you’re feeling lazy (which we all do at times), or aren’t yet confident that you can change things (which you can!!), minimizing the amount of contact may be a good way to start the training, since you won’t be bombarded by “threats” all at once.

The best way to help is to teach him that great things happen when he meets other dogs and people. It’s about redirecting his attention to you, and giving him favourite treats until the “threat” has passed.

Save the good stuff for this training, so he’ll be even more motivated. Chicken, turkey or even vegetables are good, if your dog is allowed them as part of his diet. Keep the pieces small, and watch his weight.

I recommend buying a treat pouch, to keep your treats handy. There’s a clip that allows it to be easily attached to a pocket, belt or waist band.

There’s a range within which dogs are perfectly fine, but closer than that, on leash dog aggression starts. Do you know at what distance your dog starts to growl/bark/lunge?

For practice, recruit someone you know with a very calm dog. Start off with them in that safe range, and walk towards each other. While still in that safe zone, ask your dog to sit or call his name, get him to focus only on you, and start giving him the treats, praising him the whole time.

Keep giving him treats only until your friend and dog have walked by you and are no longer in view, then stop. Don’t say anything, or look at him, just carry on with your walk. You want him to know nothing happened, no big deal.  Repeat this exercise every few minutes, but don’t go on too long, then try again the next day.

A quick note – when passing each other you need to be several feet apart.

Each day that you try this exercise, have your friend and dog get a little closer. Depending on how reactive your dog is, you may make very slow progress, but that’s okay. If he barks or lunges, you’ve gone too fast. Rushing it could cause setbacks, and you’ll be worse off than before you started. 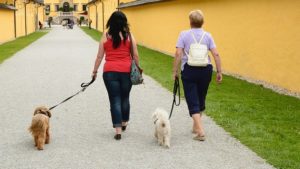 If you don’t have a friend to practice with, go to an area where you know people walk their dogs, but go when it’s a quiet time so he’s not bombarded all at once. Remember to keep distance between yourself and other dogs, but allow them to be within your dog’s sight.

If you’re feeling unsure, or someone comes up suddenly, stay calm, change directions, then try again with the next dog. It takes practice to get the timing right, so don’t be too hard on yourself.

You could also try sitting on a bench with him if that would make you more comfortable to start with, and do the same things with the treats. I’d start with a bench in a quieter area, so he doesn’t have to deal with a steady flow of people and their dogs.

You’ll find people will want to come up to you, please warn them off before they get too close and your dog starts to bark. That sets his training back, and causes him unneeded stress. 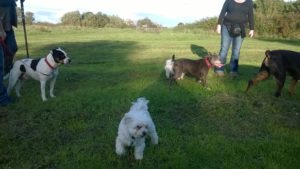 My husband and I adopted a dog a couple of years ago, who we called Jack. Not very original to be sure, but seems to suit him. Anyway, it’s pretty obvious he was abused and was worse than a nightmare on a leash. If he saw a dog, or a person in the distance (and I mean very far distance) he would literally go ballistic.

I talked earlier about having someone with a calm dog help, but I didn’t have that. I followed the rest of the advice about walking when it’s quieter, making him sit and look at me as someone approached, giving delicious treats…. It took a long time, and it’s still ongoing because he had severe issues, but he is like a different dog thanks to this process. I still bring treats just in case, but he’s doing great.

Desensitisation does work (as long as his aggression does not stem from any of the health issues I mentioned) but you do need patience, consistency, perseverance and the desire to help.

It takes lots of practice to get the timing right, so don’t be too hard on yourself. If you’re not feeling confident, you can stick to quieter areas until you get the hang of it.

If something wasn’t clear, or you have questions, please contact me through the contact page, or the comment section below, and I will be more than happy to help with your on leash dog aggression issues.

Separation Anxiety in Older Dogs
Next Post:Housebreaking an Older Dog: How To Do It Successfully