A Holistic Approach to Treating Cancer in Dogs

While most vets would recommend treatments such as chemotherapy, surgery and radiation, are you interested in discovering a holistic approach to treating cancer in dogs?

Although I never had a dog with cancer, I did have 3 cats who had various types of the disease.

Tyler had squamous cell carcinoma in her jaw. I only discovered it because there was some black stuff on the side of her mouth that looked like dirt, but when I tried to get it off she would flinch when I touched it. I wasn’t too worried but since I was already going to the vet with one of my other cats, I figured I would bring her along. Good thing I did because we caught the tumour in enough time to cut it out. Yes it sounds violent and she lost a good part of her jaw, but she adapted quite quickly to a new way of eating and lived several more years. Eventually a tumour developed behind her eye and we had to put her down. Tyler was about 16 or 17. 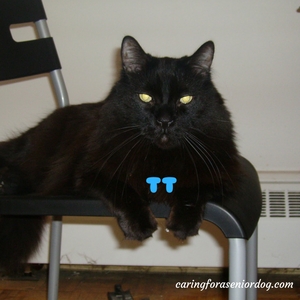 One day while petting TT I felt a golf ball sized lump in his neck. I used to pet him all the time so imagine how shocked I was to discover that lump. It turned out to be hemangiosarcoma. Because of the tumour’s location surgery was not an option, so we agreed to chemo. When one drug stopped working we agreed to try a second. When that one stopped working we said we’re done. It took less and less time for the tumour to grow back so what was the point. How much can you subject your pet to?

The oncologist was obnoxious and pushy, and literally spoke to us as though we were terrible pet parents for not wanting to put TT through any more. We stood our ground since we believed it was in the best interest of our cat, and a couple of months later he had to be put down. He was 12. 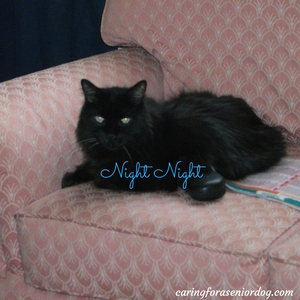 The last experience was with TT’s brother Night Night. Yes I do suck at naming my animals!! What we thought was a urinary tract infection turned out to be a tumour in his bladder. There wasn’t anything the vet could do and put him down. He was 17.

Why all this talk about cats on a senior dog site

It is because of an article I recently came across – holistic vets discussing cancer in dogs, comparing attitudes and approaches of “traditional” vets and holistic vets. Even though my experience involved cancer in cats, the information was just as fascinating, especially when weighed against my own experiences.

My interest in a more holistic approach to pet care

I’ve always been interested in alternative treatments for myself, and for quite some time I’ve wanted the same for my dog Red. Today, finally, I was able to take her to see a wonderful holistic vet named Dr. Ortega here in Spain. I share his philosophy about the type of care I would like for Red, and I’m looking forward to hearing his treatment plans and seeing positive changes. I am particularly hopeful about the ability to reduce the amount of medications she’s currently taking.

An article worth reading

The article I refer to is called “Holistic Vets Explain: Natural Treatment Of Cancer In Dogs” written by Julia Henriques and published in Dogs Naturally Magazine.

You don’t have to have a dog suffering from cancer to find this post of interest. Just reading about the differences in how disease is viewed should be fascinating enough.

It is for these reasons I’ve wanted a kinder and gentler approach for Red.

A holistic approach to treating cancer in dogs – conclusion

Have you had to deal with cancer in dogs? What type of treatment was recommended? Was your dog treated by a holistic vet? Share your experiences in the comment section below or if your dog was a senior you can share your story on my Facebook page.

A Guide to Choosing the Right Dog Food
Next Post: Best Vets Glycan Plus Glucosamine