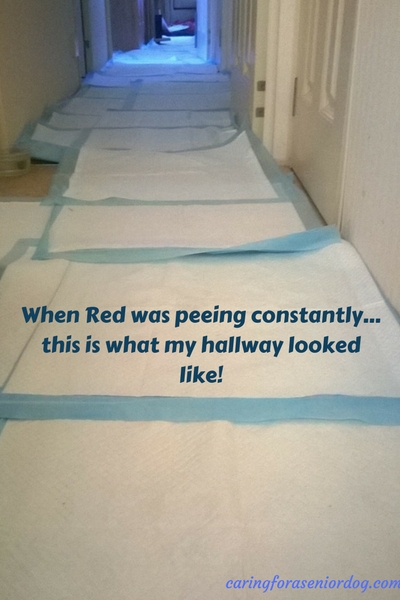 Perhaps not the most glamorous topic to discuss, but incontinence in older dogs is a reality for some, so let’s get to it!

Many people who have the pleasure of sharing their lives with senior dogs attribute any and all changes to the natural course of aging, urinary incontinence included. While that may be true in some cases, there are plenty of other possible causes, so changes of any kind should always signal a trip to the vet. A problem caught early has a 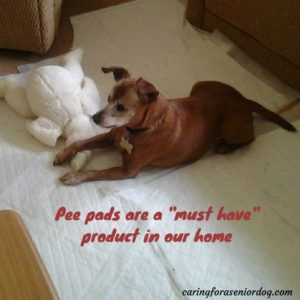 better chance of being fixed, handled or managed.

It is the inability to hold urine in the bladder, which is different from needing to pee more often because of disease or illness for example.

Who is at risk?

Incontinence can affect dogs of any age both male and female, but typically it is seen in middle aged to older female spayed dogs.

Causes of incontinence or an increased need to pee

The most common cause, it occurs when there is a decrease in the production of estrogen and testosterone.

Muscular tissue at the base of the bladder, which a dog can control, prevents urine from leaking out. Estrogen in female dogs and testosterone in males is what strengthens that muscular tissue. When something affects the production of those hormones (spaying/neutering and the natural decrease in hormone production as a dog ages), the bladder sphincter weakens and urine will leak.

For a period of a few weeks several months ago my senior sweetie Red was peeing like crazy. She drank but I never noticed her drinking an excessive amount, yet she would pee constantly. As many times as I take her out in a day I couldn’t keep up, and had to keep pee pads on my floor. It was determined to be due to a hormone issue, so is now on medication for the rest of her life, unless my new holistic vet has an alternative recommendation!

A urinary tract infection (UTI) or bladder infection causes such a strong desire to pee, it can be hard to hold it, not to mention increasing the frequency your dog pees as well.

Red had 2 UTIs in quick succession, both times treated with antibiotics. When she got a third my vet recommended an ultrasound to see, literally, what was going on internally. He discovered the infection was higher up than is typical, so sent a urine sample off to the lab to determine the exact type of bacteria for a more targeted antibiotic. That one finally worked.

My 17 year old cat Night Night (RIP) had a couple of bladder infections before he was diagnosed with a tumour. It was distressing to watch the effect that infection had on him. He would go in and out of the litter box constantly, trying to pee. He was prescribed a course of antibiotics, but small traces of blood were still detected. When a second course failed, my vet recommended an ultrasound which revealed a bladder tumour.

Spinal or neurological issues can cause a loss of bladder and bowel control, because the signals are having trouble getting through, if at all.

On August 22, 2016 over the course of just a few hours, our dog Jack lost the use of his back legs. An MRI showed a disc had exploded and surgery was performed immediately. Although he did not suffer from urinary 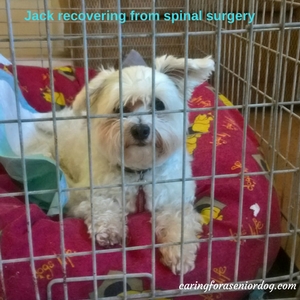 incontinence, he did experience short term fecal incontinence. Until he started regaining some movement in his back legs (the first tiny movement happened 3 weeks after surgery), Jack had no idea when he was pooping. We would be out walking him with a sling to support his back legs, and he would poop as he kept on going.

Stress or anxiety, often experienced more by older dogs, can lead to involuntary peeing. Possible reasons may include a touch of dementia, hearing or vision loss.

Incontinence due to stress was something I became familiar with when we adopted an 8 year old puppy mill rescue we named Saffy. Having been kept in a chicken coop her entire life, used only for breeding, you can’t image 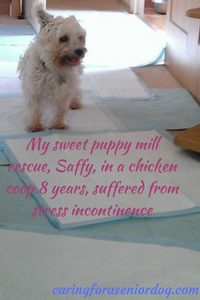 the terror she felt at everything. Without going into a long story, suffice it to say she would pee whenever we approached her. Over time she started gaining some confidence so that became less of an issue.

Some dogs drink so much water their bladders can’t hold it all, no matter how often they go out.

Common conditions that cause excess drinking include:

I include dementia under possible causes because dogs with dementia may:

Forget their housetraining and pee wherever and whenever

Whether or not dementia can “officially” be classed under the incontinence heading is debatable, but I think it could be considered involuntary peeing.

Tumours in the bladder

They’re rare (although my cat Night Night had it), they can happen and cause incontinence.

Signs your dog may be incontinent

A looser opening to the bladder (caused by age and lower hormone production) makes it easier for bacteria to enter the body and cause infections. Which is what happened to my dog Red.

My vet explained because female dogs crouch when they pee, they are more susceptible to picking up bacteria. Now after Red pees, especially if she’s on the dirt path behind the house, I use a natural doggie wipe to reduce the

If urine is on the skin for a long period of time, it can burn and irritate.

The dogs that do not respond to medication, and surgery is not an option for whatever reason, leaking may continue to happen. Doggie diapers and pee pads can be an answer.

How it is diagnosed

I recommend bringing a urine sample to the appointment if possible. It should be collected first thing in the morning mid stream (meaning let your dog pee a little before you collect the urine), in a clean container and do not refrigerate. Schedule the appointment as early in the morning as you can, as the sample should be tested within 2 hours of collection.

What to expect during the appointment

Your vet will have a chat about your concerns, what you’ve been noticing, when it started, how long it’s been going on, and will then examine your dog. He will analyse the urine and quite possibly have a diagnosis, or at least the start of one on the spot. Whether he’d like to take blood, or has reason to believe further testing should be done right away, is of course up to him.

Other than behavioural incontinence which may be helped with training or a chat with a behaviourist, there’s nothing to prevent it only to treat it once it has started.

The treatment plan will not only depend on the cause, but also the type of medicine your vet practices, meaning traditional or holistic.

(NOTE: please don’t run out and give your dog remedies you’ve researched online. If you are interested in treating your dog naturally, make an appointment to speak with a holistic vet).

One of the members of my FB group, Senior Dog Care Club gives her dog a prescription drug called Proin, which helps manage urinary incontinence. She says it has worked wonders and shared this with the group. Her dog is 41 lbs and gets 1/4 of a tablet twice a day.

Pee pads around the bed and the area where she sleeps can prevent carpet staining. I should have bought stock in 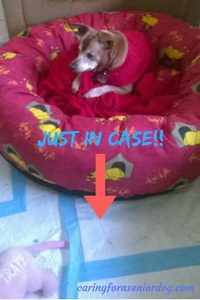 a pee pad company I use so many, but I couldn’t be without them.

If necessary take your dog for more frequent pee breaks, and be sure that includes first thing in the morning, after naps and before bed.

Keep an eye on her skin and deal with any irritations immediately. Left untreated a minor spot can become a full blown infection.

I don’t recommend reducing water intake as that could have dangerous ramifications.

In this post “Dog Incontinence Products” you’ll find lots of products to choose from to help you deal with this issue.

I know from my own experience how frustrating all that extra peeing can be, and how tough it is seeing your dog in discomfort. Don’t let it go on undiagnosed, as the sooner you know the cause the sooner you can start working towards a solution.

Have you had to deal with incontinence in older dogs? What caused it and what solution did your vet recommend? Did you have to make many adjustments to your routine, living situation…?

I would love to hear your experiences so leave them in the comments section below, or on my Facebook page.

What You Need to Know About Vestibular Disease in Dogs
Next Post:Dog Incontinence Products