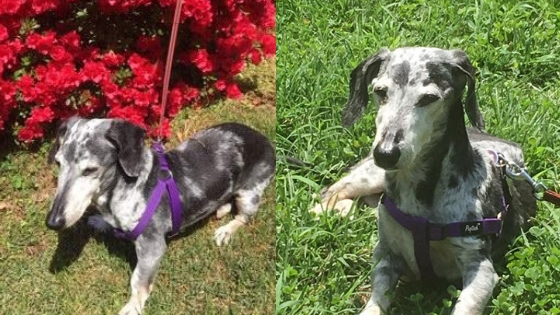 My Milo was a rescue from an elderly couple that was beginning to have severe medical issues. As heartbroken as they were they made the loving decision to surrender their little dog, who was two at the time to the local vet. As fate would have it my daughter was a receptionist/tech at the vet. She brought “Snoopy” home and immediately we fell in love with him.

At first, my son who was just moving out wanted him. Since we had two dogs already that was good. I knew (Nana) would have him during the day anyway! Then my son moved to an apartment which didn’t allow dogs so our little guy came to live with me. I of course was thrilled to have him full-time and my son could come over anytime he wanted. Our new little man was a Dapple Dachshund! He was very different looking and we had never heard of a dapple. He is black, tan, white, and silver. Gorgeous, I might add. He came in full of energy and very affectionate. We, at the time had just lost our rescue Akita- Moses to that devastating disease of cancer. We still had our big golden retriever, Duke, and they became best of friends! Our new little guy helped us and our Duke with the loss of Moses.

My family has rescued many dogs, from marvelous mutts, to beautiful brittany spaniels, to howling huskys, to burrowing beagles, to adorable Akitas. We’ve inherited a few and bought the golden from a friend. Never had we had a dachshund! We changed his name from Snoopy to Milo (my kids choice from the movie). He was so full of love you could call him anything and he would come! 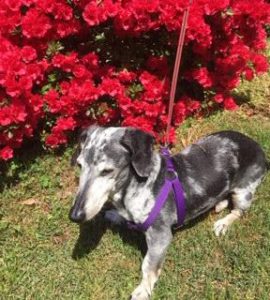 Through his years he has been so much fun with such a great contagious happy personality. He has always loved to play ball although, he wasn’t the best at catching (more times than not he would get hit in the nose). When we would put him in the pool he would race with the other dogs and be the winner! Mostly because he really didn’t like being in the pool! He loved it when you would get on the floor with him and jump at him, play tug of war with him, and roll toys at him. He seemed to have a discernment, if people that came to visit weren’t particularly fond of dogs, he would be all over them. My husband‘s grandmother used to take her cane and try to swoosh him away and he would lay on her feet, try to jump on her lap, go up to her face and give her kisses, it was absolutely hysterical. He was determined to win her over with kindness and kisses! He was like a child and would not take no for an answer. The more she tried to ignore him the more he persisted.

As he’s gotten older life has changed. He has several health issues including heart murmur, arthritis, mostly blind, mostly deaf, and dementia. All of those things are a struggle but the hardest of all is the dementia. It is so hard when he gets stuck in a corner, or looks at me with seemingly blank eyes, or snaps at me but then immediately licks me because he feels bad for what he has just done. Occasionally, he has had poopy accidents and gets that look like “I’m sorry, I didn’t mean to…”. The other things I can deal. I stretch him a lot, take him to the chiropractor, carry him around, and hug and wrap him in his favorite blanket for security. The dementia with meds I am working with but it’s so sad. Every day you feel like you’re losing a little bit more of him.

Today was the perfect example of old age. I always used to put my hand under the covers up towards his face and then move my fingers up and he would bite at them playing. Today when I did that he went to bite instead let out a huge yawn. I guess he’s telling me he’s a little tired. He will be 19 in a couple days and i will have a party for him.

He has been with me through sickness, the passing of my parents, the loss of my Grand-babies, and the sudden death of my husband. I will be with him….

He’s not just my dog, my fur buddy, my reason to wake up some mornings. He’s my best friend, my baby boy, and my four legged big hearted love!!

21 Ways to Show Your Dog the Love on Valentine’s Day
Next Post: 14 Great Ways to Exercise Your Old Dog Indoors