How I Taught Saffy to Use a Dog Ramp 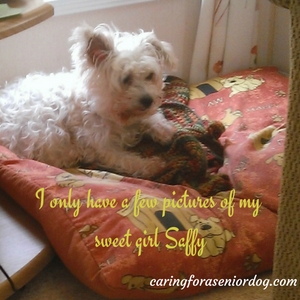 This post is about how I taught Saffy to use a dog ramp.

Let me start by saying you’ll have to rely on my descriptive abilities, since I have no pictures of the process, and only a few of Saffy. Two reasons for that…I didn’t know I would be starting this website and need so many images in a wide range of situations, and I didn’t expect the vet to 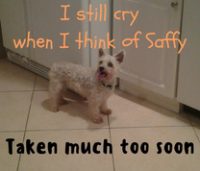 panic during dental surgery and cause her death, 9 months after we rescued her.

I immediately set the ramp up alongside the bed.

What I didn’t do

All the steps in between!

Saffy was subjected to horrific cruelty and was so petrified of everything, nothing would have been gained by going through the steps.

Every morning right before I would get out of bed, I would hear Saffy’s footsteps as she ran in and out of the bedroom. She was so desperate to get up on that bed, she was too terrified to try. Hence the ramp.

She loved food so that made things easier. All I did was put a treat on the foot of the ramp, walk out of the room so she wouldn’t feel trapped, and replace it after she ate it. Then I would put 2 treats in a row, then 3 and so on, until there were treats all the way up the ramp.

She would grab them very quickly, then turn and run out of the room. Bless her, it was so sad to watch, but she kept doing it so I was proud. I would say it took about 1 ½ weeks until she put a paw on the bed, and another several days until she lay down on the edge of the bed.

What a triumph that was!

The steps in between

I’m assuming you don’t have a dog with such horrific issues, so it shouldn’t take much, if any time to help him get used to it. You’ll be starting with the ramp flat on the floor, and ending up 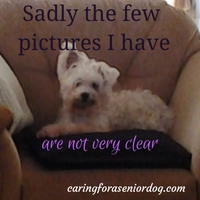 with it at a full incline, never advancing to the next step until your dog is confident with the training to that point.

Lay the ramp flat on the floor and let your dog check it out. If he seems fine give him a treat (toy or praise if he prefers). Do this a couple of times, or more if needed, until you know he’s not bothered being around it. Don’t reward him if he seems fearful, because you’ll be reinforcing that feeling – only when he’s relaxed.

You’re at step two because he’s perfectly fine being around the ramp. If he’s still a bit hesitant, go back to step one. It’s better to take longer than rush and cause anxiety.

Set it at a very slight incline, then put a treat on the ramp itself, but close enough to the edge he doesn’t have to put a paw on it. If he’s fine take another treat and put it slightly further up, then another further up than that.

Don’t move it along until he’s comfortable with the previous distance.

You can take one treat and put it further and further back, or create a trail from bottom to top and let him eat his way up, it’s entirely up to you. Once he’s walking happily along the ramp, gradually increase the incline until it’s at the position he’ll be using it at.

Sounds like a lot of effort just to walk up a ramp doesn’t it?

Since the dogs I adopt tend to have difficult pasts, I write with that in mind. I would say that while a large percentage of dogs will have no issues walking up the ramp from the start, that won’t be true for every dog and that’s perfectly fine.

Each one is different, and it would be unrealistic to expect them all to react the same to something unfamiliar. At the end of the day, it will take as long as it takes. The important thing in any training is not to rush. Better to take longer and succeed, then rush and have your dog develop anxiety. It is a lot harder to deal with and will require more patience than you didn’t have for the ramp training.

How I taught Saffy to use a dog ramp – conclusion

It’s wonderful you’ve decided to invest in a ramp, and you will see how much it will benefit all of you. I hope you found this post helpful in teaching your dog to use a dog ramp.

The Single Most Important Thing You Need to Know About Dog Ramps
Next Post:The Importance of Mental Stimulation For Dogs